This Is The Place Monument

On April 7, 1847, a group of Mormon pioneers led by Brigham Young left Winter Quarters in Nebraska (Omaha area).
They were going to the Great Basin to settle and develop a place for them to live where they could exist without the persecution they had suffered for many years. In this vangaurd company there were 73 wagons, 143 men, 3 women, and 2 children, making in all 148 souls.
They traveled across the plains through the center of this country and continued on through the canyons of the Rocky Mountains until on July 24, 1847, they arrived at the mouth of what we call Emigration Canyon and beheld the Valley of the Great Salt Lake.
Brigham Young had been sick for several days preceding the 24th and was riding in the back of Wilford Woodruff's carriage.
The accounts say a carriage but Wilford Woodruff's wagon in the Daughters of the Utah Pioneers Museum is a wagon. But then..........................
Anyway upon arriving at the spot where they could look over the valley Brigham arose from the bed he had in the wagon and after surveying the scene he beheld before him he made the statement that "This is the right place, drive on."
There was a small group that had entered the valley three days before so the group that entered on the 24th was not really the first but the event is commemorated on the 24th of July with Brigham's arrival and declaration. 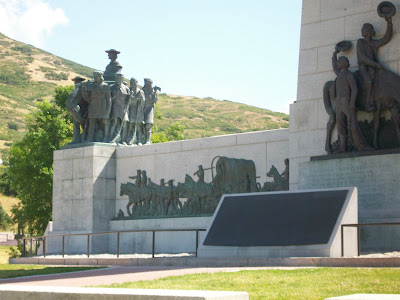 This marked the beginnings of serious settlement of the areas around the Great Basin and eventually led to many towns and cities being established and Utah becoming a state in the Union.
It was decided that a monument should be erected to commemorate the arrival of the pioneers in this valley. In 1937 Mahroni M. Young, a grandson of Brigham Young was selected to design the monument which he did and in 1947 the monument was dedicated in conjunction with the centennial celebration of the entrance of the pioneers to the valley. 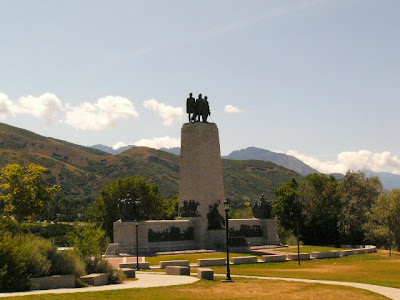 The monument is 60 feet in height and 86 feet long. At the top of the pedestal stand Brigham Young in the center and Wilford Woodruff on the south and Heber C. Kimball on the north. All three were prominent leaders in the beginnings of Mormonism and were very important part of the move to and settling of this part of the West. 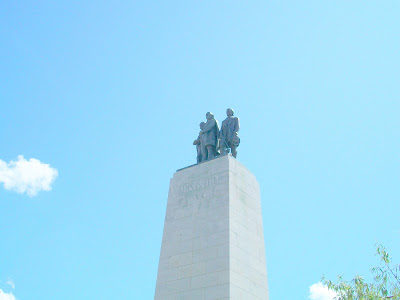 Along with the three men on top there are a number of other individuals and groups memoralized on plaques, reliefs, and statues. 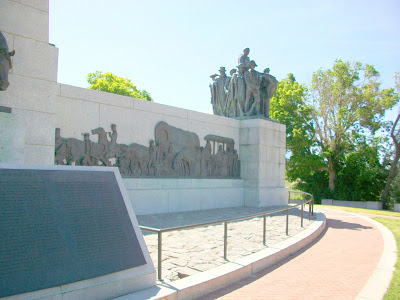 The early explorers and trappers and others who helped to open this part of the west for exploration are remembered. 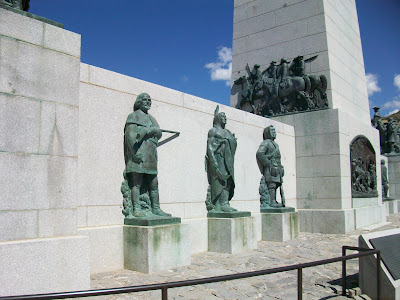 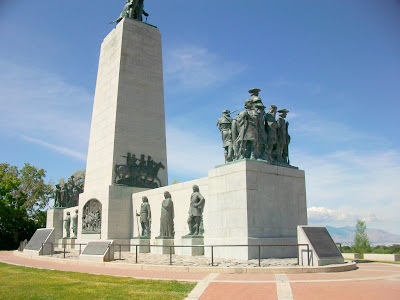 The monument is very interesting to see and it is worth the time to stop and really look at all that is shown about the early settlers and explorers.
The monument is easy to get to and is right across the street from the Hogle Zoo. And the Hogle Zoo could be another part of a trip to the area. They also have a restaurant on the site, the Monument Cafe, serving a monumental sandwich.
I went back to get a sandwich but found out the cafe is closed on Sunday.
One note of interest. The site of the monument must be on a place that was more suited to
build because there is a white obelisk about 200-300 feet up the hill from the parking lots, to the northeast that is the original marker of the site where Brigham Young made his statement. 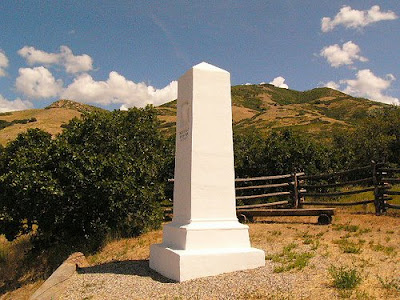 Posted by Harland W Larson at 8:48 AM