Las Vegas is a town that I enjoy visiting.  I am not a gambler per se.  I do a roll or two of nickels when I am there but I am really interested in many of the shows and especially the eats!

The restaurants and smorgasbords are fantastic.  One of my favorite things to do in Vegas is to watch the parades.  I am a people watcher and there are hundreds of spots in the big casinos or on the mall they made on the old Fremont Street.

Just pick a spot and sit back and watch all the people who go by.  It can be very fascinating to just watch the variety of people who are present.

Another treat are the many museums that are to be found in Vegas.  Many are within the casinos out on the strip but there are also a number elsewhere in the city like the Liberace Museum, which I hear will close in October of this year, but also the Elvis Museum and there are a number of other interesting sites to visit. 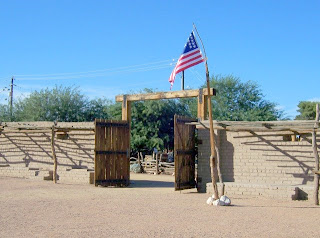 In wandering around Vegas I got a surprise to find the Old Mormon Fort and also to learn that it was the first settlement in Las Vegas.

Las Vegas is a Spanish name and means the Meadows and the area was an oasis on the Old Spanish Trail from New Mexico to California.  Paiutes, trappers, the early Spanish explorers used it as a rest stop in their travels and at that time there was clear running water and green grass meadows as far as the eye could see. 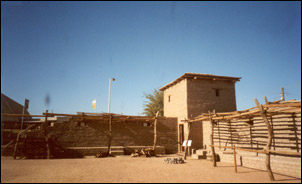 In 1855 Brigham Young sent a group of 30 missionaries to settle in the Las Vegas area.  They were to establish a settlement and work with the Indians and teach them farming.  Brigham Young wanted a settlement in this area because it was a half way point between Salt Lake and the San Bernardino Mission.

They built a small building out of adobe and started raising some crops and began to work out some irrigation but soon abandoned the endeavor when the San Bernardino Mission closed.

The building was later added to and a 14 foot wall was built around the site by later ranchers and such.  It was called a fort but there was never any permanent troops posted there.  The Old Mormon Fort sat on what must have been a pretty good source of water and is a look into the history of Las Vegas.  In the 1850s there was water and what must have been some good grassland but the water source later dried up -- I suppose?
Posted by Harland W Larson at 2:37 PM